April published its annual report for 2012 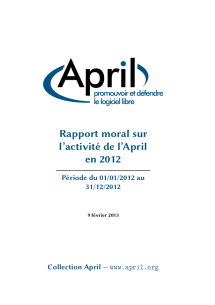 April's general assembly took place on 9 February 2013, during a weekend members' meeting, two days of small-group workshops and plenary discussions. The association's 2012 report (76 pages) was adopted during this general assembly and is available online or inPDF version (only in French but an English translation will be published as soon as possible).

Lionel Allorge, April's president, said, « In 2012, our voices are being heard: Free Software awareness among presidential and legislative candidates; mobilization aimed at correcting the European unitary patent's failings; victory over ACTA; the Ayrault circular favoring the distribution of Free Software in the ministries; the Pack Liberté campaign led jointly with Framasoft and La Quadrature du Net; the publication of the Guide Libre Association… »

We are currently working on a list of positive proposals for political leaders, and continuing to mobilize against the ever present 4 dangers (DRM, treacherous computing, software patents, and bundled sales).

We were also continuing to raise awareness among the general public, in education, among associations, at the level of economics, diversity, accessibility, etc. New "April Camps," as well as soirées and picnics---a multitude of opportunities to talk and share good times---have already been planned.

It's thanks to the commitment and support of everyone---April staff, volunteers, and members---that we are able take action for freedoms.

Together, let us continue to develop free computing!