French Ministry of Defence and Microsoft "Open bar" contract: “We gave away our freedom, we betrayed our country” 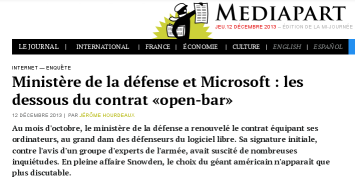 On Thursday, 12 December 2013, Mediapart published an article entitled French Ministry of Defence and Microsoft: the hidden side of the “Open Bar” contract |fr]. The information website investigated this case, contacted the persons involved, and now reviews the circumstances of the contract signature in 2008/2009, and its renewal in 2013.

April has been working on this dossier for several months. In October 2013, we published three documents which showed that the choice of an Open Bar contract was indeed the result of a political decision, made ahead of the feasibility and risk studies. Mediapart provides new pieces of information.

The article says that Mediapart was unable to learn the details of the contract renewal, whether in terms of number of work stations involved, or global cost: Jean-Yves Le Drian's Ministry of Defence refuses to give any relevant clue. Over a month ago, April requested the release of the contract details from the Ministry of Defence. In the absence of an answer, we have just brought the matter before the Committee on Access to Administrative Documents (CADA). April also called out to the President of the Republic, in an open letter published by Mediapart [fr].

Mediapart looks back at the history of the contract signing, which was done despite negative opinions by the rapporteur of the Committee for State Public Procurements (CMPE) and the ad-hoc expert group appointed by the Ministry of Defence. Mediapart states that “According to several knowledgeable parties, one of the reasons why Microsoft was given preference might be the intense lobbying by the American giant. Microsoft does have correspondents within various agencies to defend the company's interests.” The article also analyses the role of Alain Dunaud, the Deputy Director of the Inter-ministerial Department of Information Systems and Communication (DGSIC), and Bernard Marty, “the person in charge of Microsoft lobbying within the Ministry” according to one of the expert group members.

The conclusion of the Mediapart article quotes one of the parties involved:

“One sure thing is that the experts were not properly listened to,” now recognizes one of the negotiators. “I am a military person. And I must say that I am not proud of my country,” he further says. “I could have accepted a lot of things, as long as I was told why. In this case, we never had any answer. The motto which we are fighting for, and which many of us have shed blood for, is « Liberté, égalité, fraternité » (Freedom, Equality, Fraternity). In this dossier, we gave away our freedom, we betrayed our country. And to this day I am unable to tell you why...”

We advise you to read the entire Mediapart article [fr].