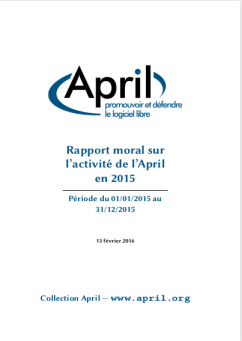 2015 was particularly rich in activism.

At a national level, the year was marked by the preparatory work for the “Digital Republic” bill. April led many campaigns to raise policy makers' awareness of the issue of Free computing and to push for the adoption of a serious public policy in favor of Free Software.

We ran these national campaigns on several fronts:

At the international level, we should note the mobilization around MEP Julia Reda's report on the reform of the copyright directive and on the ongoing negotiations regarding the TAFTA/ TTIP/ CETA/ TiSA trade agreements.

Furthermore, April is proud the cities of Paris and Grenoble and of the Provence-Alpes-Cote d'Azur province have joined as members, thereby asserting their commitment to Free Software. Convinced that reinforcing and protecting the model of the Free Software mouvement is in the best interest both of local authorities and of any entity that uses or develops Free Software, April wishes to increase the number of such memberships. It intends to facilitate interactions, feedback sharing, and synergism between the local authorities who are members.

Our staff is being renewed: After six years of having been in charge of public affairs for April, Jeanne Tadeusz is off to new adventures; she isn't, however, leaving April, as she has become a full-fledged member and will no doubt be contributing as a volunteer. We wish her all the success she deserves in the new professional path she has decided to embark on. Etienne Gonnu joined the April team at the beginning of the 2016 and will be succeeding Jeanne. He has a master's degree in comparative law from Paris X–Nanterre and one in digital law from the Sorbonne. He is deeply committed to fundamental rights and the general good and wishes to contribute to a freer and fairer society.

2016 will most likely be as busy a year as 2015. The ongoing review of the "Digital Republic" bill, the possible reform of the European copyright directive (EUCD), the many events we will be part of, preparations for the 2017 Candidats.fr campaign, the update of our roadmap, and the list can go on.

The end of the year will be marked by April's twentieth birthday. And we intend to celebrate it fittingly everywhere we can.

It is thanks to the commitment and the support of all, staff, volunteers, and members of April, that we were able to carry on our campaigns for freedom.

Together, let's keep on promoting and defending Free computing!