Copyright Directive Proposal : in Need of Real Debates in September Instead of Caricatural Claims 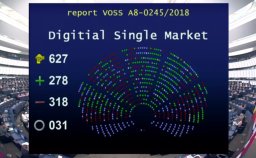 On July 5th, following an outstanding international rally against the text, the plenary session of the European Parliament rejected, by 318 votes against 2781, the mandate given to MEP Axel Voss on the report adopted in the legal affairs committee (JURI) on June 20th 2. April congratulates the members of Parliament for their vote and thanks everyone who rallied against this text. The proposed copyright directive is sent back for discussions in the next European Parliament plenary session, that starts on September 10th. This gives MEPs a new opportunity to amend the text, and possibly to reject it. We must keep the momentum going.

These last weeks, supporters of the JURI proposal have led a campaign to discredit the strong grassroots movement against this text. The opposition was caricatured as being orchestrated by the "GAFAM", and all of its arguments were characterized as "fake news", without ever being answered to in factual terms. This avoidance strategy, meant to distract from the subtance of the text, for instance automated upload filters, failed. The Members of Parliament were not duped.

"An important grassroots rally against the text lead to the rejection of the mandate, but we must keep the momentum going, until the vote in plenary on the substance of the text. Either to correct the dangerous provisions of the directive, or to reject it" declared Frédéric Couchet, April's executive director.