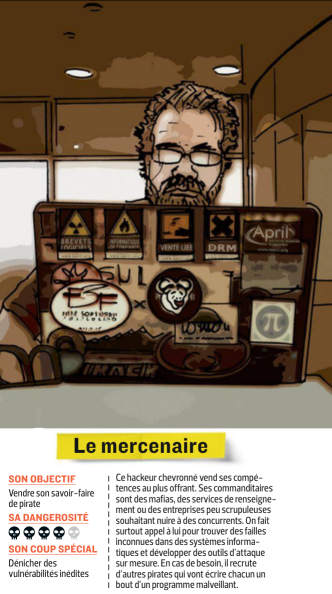 In its March 31, 2016, issue No. 843, the French "01net magazine" published a special feature on the " Viruses, the surging ones ". In the article titled " We've traced down the Web crooks " (p. 33), the authors try to to understand who is responsible for attacks via ransomware (a software that encrypts data on a victim's hard drive, which can then be unencrypted only following a payment of a ransom) and hides behind this " malicious software ".

The mercenary is described as a " highly qualified hacker who sells their abilities to the highest bidder, [...] the mob, intelligence services, or unscrupulous companies [...] ". He is depicted as a man behind a laptop covered with the stickers of the Free Software Foundation (FSF), La Quadrature du Net, and April, and, in particular, those related to the four dangers to Free Software (see article excerpt).

Associating the FSF, La Quadrature du Net, April, their members, and supporters with malicious activity is scandalous. Whereas a malicious program is conceived with the aim of doing harm to an IT system and its user, free software allows for computing that's at the service of the users. The campaigns of the FSF, La Quadrature du Net, and April aim to develop and defend computing freedom and the rights and freedoms of the citizens on the Internet.

Our translation of the excerpt: "The mercenary. This highly qualified hacker sells their abilities to the highest bidders. Their backers are the mob, intelligence services, or unscrupulous companies wishing to do harm to competitors. S/he is mostly called upon to find unknown flaws in IT systems and to develop customized attack tools. When needed, s/he recruits other pirates who will each write each write (a part of some) malevolent program".